What’s in a Marriage? Bynums on both sides of the Civil War Divide

One of the genuine surprises of my research on The Free State of Jones was the discovery that my own Bynum ancestors were deeply involved on both sides of Jones County’s inner civil war. I learned about the Free State in a history book, not from my father, who never mentioned Newt Knight or the Knight Company to me before his death in 1990. In that way, I’m like a lot of folks who had no idea their ancestors were in the middle of such an important Civil War story until later in their lives.

There were many Jones County families, like the Bynums, who supported opposing sides of the war. My great-grandfather, William A. Bynum, son of William, born 1795, son of “Old” William, born 1763, fought on the side of the Confederacy. Like many Jones County men, he deserted the Army for a time and was charged with being AWOL. However, rather than join the Knight band, he rejoined the Confederacy. During Reconstruction, he, his father, William Senior, and his brother, John H. Bynum, all signed petitions opposing Newt Knight and his followers.

But it was a very different story for Tapley Bynum, who was a half-brother to my GGGrandfather, William Senior. Tapley deserted the Confederate Army, joined the Knight band, and was shot to death by Confederate soldiers, allegedly while at home visiting his newborn daughter.

Why were such different courses taken by members of the same family? A careful study of family alliances offers at least a partial answer. It appears that certain branches of the same family were pulled in different directions according to the families they married into. And here is where the Collins family once again emerges as one of the most important Unionist families in the region. It appears that if a branch of a family married into the Collins line, they were especially likely to be Unionists before, during, and after the war.

Newt Knight himself was influenced by the Collinses. At the end of his long life, he credited Jasper Collins with convincing him that the Twenty Negro Law made the Civil War a “rich man’s war and poor man’s fight.” Jasper then deserted and Newt did, too. It’s not so much that folks became Unionists after meeting or marrying a Collins; rather, it seems that such connections solidified their own Unionist tendencies. Jones County voters, after all, elected an anti-secession delegate to the 1861 Mississippi State Convention.

The importance of family alliances is demonstrated by two sons of Old William, Mark and Benjamin, both of whom were Unionists. During the war, “old man Mark Bynum” (born 1801) delivered a wagonload of provisions and arms to the Knight band. And well he might: his daughter, Lydia, was married to band member Simeon Collins. Benjamin Bynum was married to Simeon’s sister, Margaret. Their son, Prentice M. Bynum, joined the Knight Company during the war. Oh, and Mark and Benjamin also had a sister, Nancy Bynum, who married the oldest Collins brother, Vinson, another staunch Unionist. These branches of the Bynums married into Unionist branches of the Mauldin, Welch, and Holifield families as well. Opposition to secession and, later, the Confederacy, was most certainly a family affair.

In contrast to the above Bynums, however, who were prosperous but nonslaveholding farmers, there was a slaveholding branch of the family. Old William, the original migrant to Mississippi, had owned three slaves. He passed these slaves onto his oldest son, William, who owned them at the time of the war (this William’s son, William A. Bynum, was my direct ancestor). Not surprisingly, these Bynums married into other slaveholding families. And, during the war, they identified their fortunes with those of the Confederacy.

Tapley Bynum, the last of Old William’s sons (William was 74 years old when Tapley was born!) seems to have been raised primarily by his older brother Benjamin, and Benjamin’s wife, Margaret “Peggy” Collins. He was only eight years older than their son, Prentice, and the young men may have joined the Knight band together. On a cold January morning, the decision to defy the Confederacy cost Tapley his life. Later, Confederate Col. Lowry’s raid on the county convinced Prentice to flee to New Orleans, where he joined the Union Army and survived the war. During the 1890s, Prentice Bynum became a Populist, as did his uncle, the venerable Jasper Collins.

The Confederate side of the Bynum family is represented in two photos, below. William A. Bynum and John Hall Bynum, sons of William Bynum II, born 1795, both served in the Confederate army. 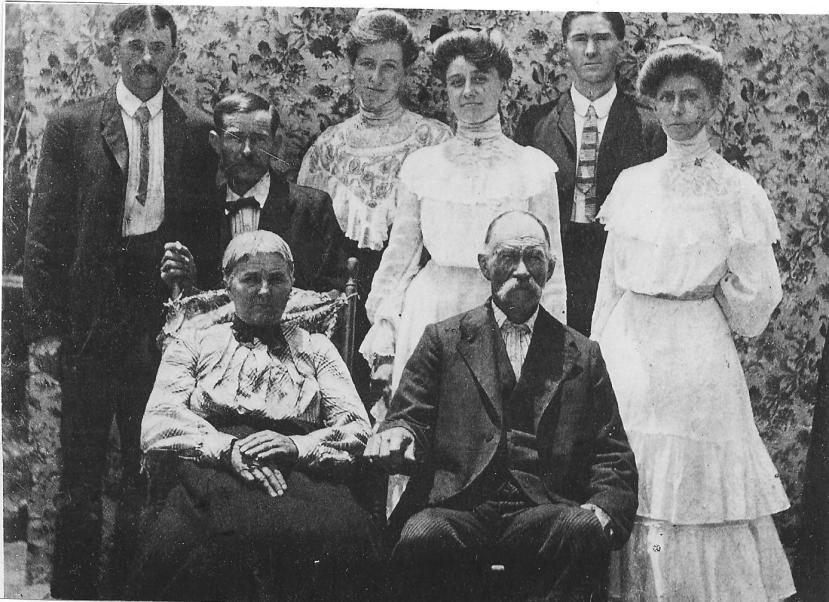 Categories: The Free State of Jones, The Long Shadow of the Civil War