“Who are These Women?” Revisited

Another Knight descendent has weighed in on the identities of the two women portrayed in my earlier post,   “Who are These Women.” Dorothy Knight Marsh identifies the woman on the left in that photo as Anna Knight, born 1874, the daughter of George Ann and, possibly, Newt Knight. Dorothy, then, agrees with Yvonne Bivins, who speculates further that the lighter-skinned woman on the right is Candace Smith Knight, also born 1874, the daughter of Lucy Ainsworth Smith and the wife of Anna’s brother, John Howard Knight. It does make sense that sisters-in-law who were the same age would pose together for a photograph. Let’s look at that photo again: 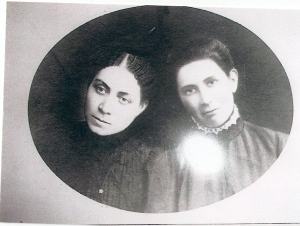 Is this Anna Knight and Candace Smith Knight, sisters-in-law?

Now let’s look at the picture below of Yvonne’s  mother, Mary Ann Dodds. Mary Ann was Candace’s niece. Both women were descended from Lucy Ainsworth Smith, and all three, Yvonne tells me, were tiny women, under 100 lbs, who were known to greatly resemble one another. Readers can judge for themselves Mary Ann’s resemblence to the woman on the right, above:

Below is an actual photo (unfortunately very faded) of Candace with her husband, John Howard Knight, and their family.

John Howard Knight family. Candace Knight is on the right, in back row. Collection of Yvonne Bivins.

So, what do you think? Look forward to more observations and perhaps even confirmations!