NOTE FROM MODERATOR: On March 17, 2009, Renegade South published the essay, “Race and the ‘One Drop Rule’ in the Post-Reconstruction South,” which presented the story of Mary Ann McQueen of Montgomery County, North Carolina. Recently, that essay elicited a response from Wallace E. “Wally” Jarrell, who is a descendant of Mary Ann’s mother, Diza Ann, and Diza’s second husband, Wilson Williams. Wally generously shared his own research on the Williams family with me, and so I have decided to repost the original essay, followed by his expanded history of the family. Here, first, is the original post–now illustrated with photos!– that drew Wally’s attention:

Race and the “One Drop Rule” in the Post-Reconstruction South

Many people, perhaps most, think of “race” as an objective reality. Historically, however, racial categorization has been unstable, contradictory, and arbitrary. Consider the term “passing.” Most of us immediately picture a light-skinned person who is “hiding” their African ancestry. Many would go further and accuse that person of denying their “real” racial identity. Yet few people would accuse a dark-skinned person who has an Anglo ancestor of trying to pass for “black,” and thereby denying their “true” Anglo roots!

So why is a white person with an African ancestor presumed to be “really” black? In fact, in this day of DNA testing, it’s become increasingly clear that many more white-identified people have a “drop” or two of African ancestry than most ever imagined. Are lots of white folks (or are they black?) “passing,” then, without even knowing it?

Having said all that, I’d like to provide some historical examples of the shifting and arbitrary nature of racial categorization. Those familiar with Newt Knight already know about the 1948 miscegenation trial of his great-grandson, Davis Knight. According to the “one drop rule” of race, Davis was a black man by virtue of having a multiracial great-grandmother (Rachel Knight). Yet, social custom and the law differed. One was legally “white” in Mississippi if one had one-eighth or less African ancestry, and Davis eventually went free on that legal ground.

Despite Davis Knight’s legal victory, custom (and often the law) at times went even further than applying the “one drop rule.” After the U.S. Supreme Court ruled segregation of the races was legal (Plessy v. Ferguson, 1896), census enumerators in the segregated South of 1900 were instructed to list people’s race as either “black” or “white”; there were to be no “in-between” designations. Some enumerators went even further than that. To reinforce the image of a racially-segregated society, they categorized many formerly white-identified people as “black” simply because they lived in multiracial neighborhoods. Hence, Newt and Serena Knight, and their children who lived (and married) among Rachel and her children, were listed as “black” in the 1900 federal manuscript census.

Similar contradictions of racial identification may be found throughout Southern court records as segregation ordinances were written into law. An example of one absurd, yet utterly serious, effort to determine whether an individual was “white” or “black” (which I pieced together from North Carolina state and federal records) follows:

In 1884, Mary Ann McQueen, a young white woman about 33 years old, was suspected of having “black” blood. So strong were these suspicions that her mother, who had always been accepted as white, swore out a deed in the Montgomery County Court that “solemnly” proclaimed her daughter to be “purely white and clear of an African blood whatsoever.” But why did suspicions about the “purity” of Mary Ann McQueen’s “blood” arise in the first place?

It all began before the Civil War, when Mary Ann’s mother, Diza Ann, ended her marriage to Mary Ann’s father, Calvin McQueen. Almost immediately afterward, she married Wilson Williams (aka Wilson Wright). By 1861, when the Civil War began, Diza had given birth to four more children. Meanwhile, Mary Ann’s father, Calvin, enlisted in the Confederate Army in February 1862 and marched off to war. Barely five months later, in July 1862, he was dead from wounds suffered in the battle of Mechanicsville, Virginia. Calvin had lived and died as a white man.

The same was not true, however, of Diza’s second husband, Wilson Williams, who was listed as a “mulatto” by census enumerators. This meant that Mary Ann McQueen grew up in a multiracial household with a stepfather and several siblings all classified as mulattos. By 1884, as segregation expanded and lines of race correspondingly hardened, many folks wondered how this white woman could have mixed-race kinfolk without being mixed herself.

With racially discriminatory laws a fundamental part of segregation, Mary Ann had a lot to lose in civil rights, as well as social standing, if she could not rid herself of the “one drop” taint. Perhaps because she lived in a small community with a long memory, her mother’s sworn statement, which reminded the court that Calvin McQueen and not Wilson Williams was Mary Ann’s biological father, seems to have won Mary Ann her whiteness, at least legally. By 1900, the federal manuscript census for Montgomery County, N.C., listed a Mary McQueen, born 1851, as “white.”

That does not mean however, that Mary Ann’s social status was restored. If this is our Mary Ann, she apparently never married, despite having given birth to a son, also listed as white. Were Mary Ann’s chances at marriage to a white man compromised by her mother’s interracial marriage? In the era of segregation, most certainly they were.

I have written more extensively about Mary Ann McQueen, Newt Knight, Rachel Knight, and Davis Knight, as well as other mixed race relationships, in Long Shadow of the Civil War and The Free State of Jones.

UPDATE: In fact, as I’ve learned from Wally, Mary Ann McQueen did marry. She married John Milton Rich, a white man, and she married as a white woman. Below are photos of the couple:

Today, most scientists agree that there is no genetic basis for the idea of humans as separate “races,” or subspecies. But, as we see in the case of Mary Ann McQueen and the more recent trial of Davis Knight, societal beliefs about race were written into law and political policy, and reflected historical struggles of power over slavery, segregation, and civil rights. 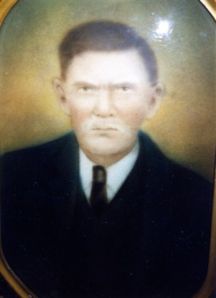 NOTE:  The stories of Davis Knight and Mary Ann McQueen are discussed in my new book, The Long Shadow of the Civil War.