Gregg Andrews of “Dr. G and the Mudcats” on the Outlaw tradition in Music and Songwriting: Borrowed from “Bowtied and Fried,” a blog from Southern Roundtable 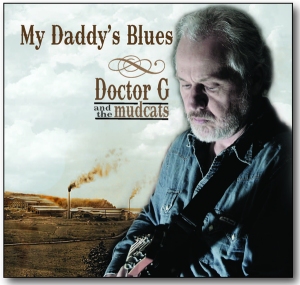 Recently, Matt Hulbert and Robby Poister, creators of the great new blog, “Bowtied and Fried,” of southernroundtable, posted a guest blog by Gregg Andrews, aka Doctor G (and the husband of your moderator). In his essay, Gregg discusses the Texas Outlaw tradition in music as epitomized by Cheatham Street Warehouse, located in the heart of the Texas Hill Country. My thanks to Matt and Robby for graciously allowing me to repost that blog on Renegade South.

When I first met Dr. Gregg Andrews, I instinctively liked him, but then I have met few people who wear white snakeskin boots so easily that I did not get along with.  Having listened to some of his music, I mentioned that he sounded like a blend of Stevie Ray Vaughn and Billy Joe Shaver.  I think the smile that appeared on his face was much less from receiving a compliment than from finding someone else in the room who wanted to talk about Billy Joe Shaver.  I immediately felt this blog would be that rarest of pairings: the perfect meeting of author and subject.

Dr. Andrews is an accomplished labor historian and the author of Nationally Awarded books like City of Dust: A Cement Company Town in the Land of Tom Sawyer and Insane Sisters: Or, the Price Paid for Challenging a Company Town, but I can’t say he would claim himself an academic first and a musician second.  Historians and musicians both are nothing if not storytellers, and these two parts have become one for Gregg Andrews.  The working-man stories that fill his books, and the rebellious characters his wife, Dr. Victoria Bynum, shares with readers, are the same stories folk and country music have been telling for years.  Gregg Andrews sees both sides of that coin.

Blending these stories with those of his own life, set to the ethereal sounds of wind through moss-laden branches on the darkest of Texas nights, Andrews developed his own unique brand of “Swampytonk Blues,” which he writes and performs as Dr. G and the Mudcats.  Songs such as “Jones County Jubilee” and “Night Train From Pecos” inspire comparisons to Kris Kristofferson, Robert Earl Keen, and others of the Texas Singer/Songwriter tradition.  Who but Gregg Andrews could tell us the story of this tradition’s rise with such a perspective?  Bowtied and Fried is proud to feature this guest-blog by dedicated historian, talented musician, and helluva good storyteller, Dr. G.

Cheatham Street Warehouse and the Outlaw Songwriting Tradition in Texas

At the end of December, I headed back to Texas to promote my new CD, “My Daddy’s Blues,” lay down some new rhythm tracks in the recording studio, and play a few gigs with the Mudcats in the greater Austin area. Shortly after my wife, Vikki Bynum, and I drove away from our house in the Missouri countryside along the Mississippi River, we tuned into Sirius XM Satellite’s “Outlaw Country” to get the right vibe for the trip. I mean, after all, it was time for Dallas Wayne’s weekday show, and he, too, is a Missouri boy who has found the outlaw singer-songwriter atmosphere and hardcore honkytonks of central Texas to his liking.

No sooner had we tuned in than we heard back-to-back songs by the Band of Heathens, Todd Snider, and the Randy Rogers Band. Alright, the trip was off to a cool start! After Vikki quickly interjected, “Hey, we know all of these guys,” I thought back on the role of Cheatham Street Warehouse , a creaky old honkytonk in San Marcos, Texas, in giving us a place to meet, get inspired as songwriters, and share the small stage that had launched George Strait in the mid-1970s. As Vikki and I sped south through the beautiful Ozarks, my thoughts turned to the important part that Cheatham Street, known for nurturing songwriters, had played in encouraging me ten years ago to integrate the honky-tonk night life of a singer-songwriter into my day job as a history professor at Texas State University-San Marcos.

Kent Finlay, a singer-songwriter, opened Cheatham Street in June, 1974, amid the explosion of Progressive Country, or “Redneck Rock,” music in Texas. At that time, rock and roll artists enjoyed considerable creative control over their music, but country music was tightly controlled by Nashville record labels and producers. For artists who loved the Outlaw spirit that infused the music of Waylon Jennings and Willie Nelson and encouraged their break from Nashville in the early 1970s, Texas, especially Austin, was the place to be. Texas was where you could do music your own way with the musicians you wanted to use, where you could enjoy artistic freedom and produce records how and where you, not the record companies, wanted them produced. Waylon and Willie, Nashville veterans, certainly didn’t create the Outlaw movement, but they celebrated it and became superstars in the process. With long hair and beards, a rawer, more rocking sound, plenty of drugs, and hard-edged lyrics that captured their honky-tonk lifestyles, they became the national symbols of rebellion against the slick-produced sounds of pop country music coming out of Nashville’s Music Row under the influence of record producers like Chet Atkins.