From Business Wire: Mahershala Ali’s performance of Audible’s version of “The Free State of Jones”

“Recording The Free State of Jones was an education on so many levels,” said Ali, best known for his roles as Remy on House of Cards and as Boggs in The Hunger Games films. “I quickly discovered that it’s not a text that necessarily needed elevating. I found that my task was simply to move out of the way, and allow this rich, historically dense narrative to speak for itself.”

Ali is joined on this recording by author Bynum, who narrates the book’s introduction.

“Mahershala Ali’s outstanding performance makes this fascinating piece of American history accessible to a wide range of curious listeners,” said Audible EVP and Publisher Beth Anderson. “Fans will love experiencing the book through Ali’s voice before seeing him on screen, and will relish the opportunity to revisit the history with him whenever they’d like through the audio production.” 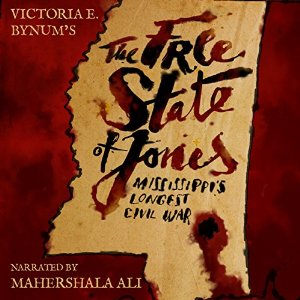 With a 30-day membership trial at Audible, new listeners can enjoy any one audiobook, including Ali’s performance of The Free State of Jones, free.

In addition to Mahershala Ali, among the acclaimed performers who have narrated works of literature for Audible are Thandie Newton, Emma Thompson, Rosamund Pike, Dan Stevens, James Franco, Jesse Eisenberg, Jake Gyllenhaal, Kate Winslet and Tim Robbins. In 2013, Audible Studios won its first Grammy Award, for its production of Janis Ian’s memoir Society’s Child, and also won the Audie Award for Audiobook of the Year, for Colin Firth’s performance of Graham Greene’s The End of the Affair.

Audible, the world’s largest seller and producer of downloadable audiobooks and other spoken-word content, invented and commercialized the first digital audio player in 1997, and has since been at the forefront of the explosively growing audiobook download segment. In 2015, listeners around the world downloaded 1.6 billion hours of audio from Audible.com outlets; Audible members downloaded an average of more than 17 books over the course of the year. Two thirds of new Audible members are first-time audiobook buyers.

Audible, Inc., an Amazon.com, Inc. subsidiary (NASDAQ:AMZN), is the leading provider of premium digital spoken audio information and entertainment, offering customers a new way to enhance and enrich their lives every day. Audible was created to unleash the emotive music in language and the habituating power and utility of verbal expression. Audible content includes more than 250,000 audio programs from leading audiobook publishers, broadcasters, entertainers, magazine and newspaper publishers, and business information providers. Audible is also the preeminent provider of spoken-word audio products for Apple’s iTunes Store.