“The Ladder by the Chimney”: Guest post by Chuck Shoemake 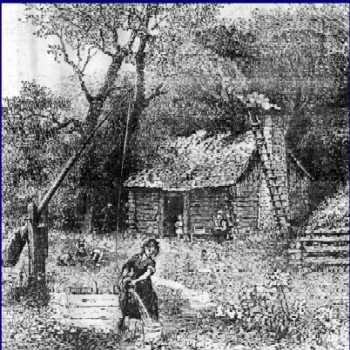 The byline to “The Ladder by the Chimney” might be the proverb “every picture tells a story” considering the memories this drawing evoked for Chuck Shoemake! Not only did I learn something new from Chuck’s essay, but I’m reminded that others’ memories, as well as our own, take us to an easily forgotten past. —vb

“The Ladder by the Chimney”

Vikki’s recent post “White Farm Women Protest Confederate Abuse: The North Carolina Civil War Home Front” included the above sketch of an early homestead.  Upon seeing it, my eyes were immediately drawn to the ladder by the chimney.  I thought that there must be some significance to the ladder because it is depicted so prominently. And then I remembered a family story passed down to me about my Great Aunt Lennie.  I have been told it was common practice in the days of wood shingle roofs and catted (clay and stick) chimneys, to keep a ladder leaned against the house and next to the chimney for easy access to the roof to extinguish fires that were sometimes started by escaping sparks and embers.

Lennie, age 26 in 1915 and pregnant with her fifth child, ascended a ladder one August morning to extinguish such a blaze.  After descending she miscarried and subsequently died shortly thereafter.   I can only imagine Lennie’s perils; pregnant, going up the ladder in a long skirt, and most likely carrying a bucket of water to dowse the flame.

My dad was born in Jones County in 1914 in a log cabin built by his great grandparents, Thomas and Darlie Ann Hutto Holliman.  The cabin was constructed previous to 1870 and included a “catted chimney” made of woven sticks and plastered over and lined with clay. This type of structure was prevalent in our area due to the readily available materials, but was extremely vulnerable to catching fire, and often did with devastating results.  My dad’s sister remembers as a child that there were always ladders leaning against homes, barns, and other out buildings but never gave a second thought as to why they were placed there.  I’m sure that in the wet and humid climes of South Central Mississippi that shingles and chimneys were in constant need of repair.  And then there was the possibility of fires, all of which would necessitate quick and easy access to the roof.

Ladders next to a catted chimney. Photographer, date, and place unknown

So why am I so intrigued with the ladder by the chimney?  I like to personalize what I have discovered in my research; to wade in the creek where my dad and his siblings would have washed turnips as kids, to run my hands over the pine fireplace mantles that were hand hewn by my Great Grandfather, to sit and visit with folks at the Mount Moriah Cemetery and listen to stories of family I have found resting there, or visit the Masonic Lodge in Ovett where my Grandfather attended lodge meetings.  And now I have a depiction of a ladder by the chimney to go along with my Great Aunt Lennie’s tragic story.